Thames Valley Police in Oxford, England, found and dug up marijuana plants in the woods, then left the owners a note that stated, “Ooops! Sorry, we missed each other, but feel free to call me on 101 so we can discuss a deal. Lots of love, TVPxx.”

Tip off led police to a forest in Oxford; officers dug up the cannabis plantation and kindly left a note to the owner #WeveGotManners pic.twitter.com/jMpmDP2iXF

“Tip-off led police to a forest in Oxford; officers dug up the cannabis plantation and kindly left a note to the owner #WeveGotManners”

A Vancouver man was taken into police custody after a standoff that featured the suspect serenading officers with a banjo.

Officers were called after reports of a naked man walking around with a knife.  When they arrived at the man’s home, he refused to surrender.

Neighbors saw the man, identified by police as Andrew Helmsworth, yelling at officers, and said at one point, Helmsworth walked outside with a banjo, which he played for the officers.

ORLANDO, Fla. —A naked man was taken to a hospital for observation after he jumped head-first through the window of an apartment in Orlando and refused to put down a large shard of broken glass when deputies arrived.

Orange County Sheriff’s Lt. Paul Hopkins says the naked man was wandering around the Chowder Bay Apartments on Wednesday night. An armed security guard pepper-sprayed him and shot him with a stun gun.

Deputies arrived and fired bean bags at him, striking him in the shoulder and leg. He walked into a bedroom and eventually surrendered to deputies.

SEYMOUR – A woman with only her shirt on was arrested after police found her stuck in a tree on the northwest side of Seymour on Wednesday.

Officers arrested 36-year-old Amanda Woods and had placed her in the backseat of the police cruiser, but as the officer was getting into the driver’s seat, Woods was able to get out of the vehicle and took off running.

She was caught a short-time later and taken to jail.

Beachgoers were forced out of the water along Long Island Thursday after two sharks were spotted swimming along the coast.

The estimated 6-foot sharks were seen about 15-feet off Tobay Beach’s shore in the Town of Oyster Bay around 11:49 a.m., Nassau County Police said.

Dickinson, North Dakota — Two 15-year-old boys are being referred to juvenile court after they were caught running nude through a field southeast of Dickinson around the 10700 block of 39th Street South on at about 7:45 a.m. Wednesday morning.

The Stark County Sheriff’s Office picked up the two boys. Major Fern Moser said, according to the incident report, “they decided they had nothing better to do but run across a field naked.”

Kenya’s Republican Liberty Party is organizing a protest in light of Obama’s vocal support for the recent SCOTUS ruling on same-sex marriage – and everybody’s going to wearing their finest birthday suit for it. 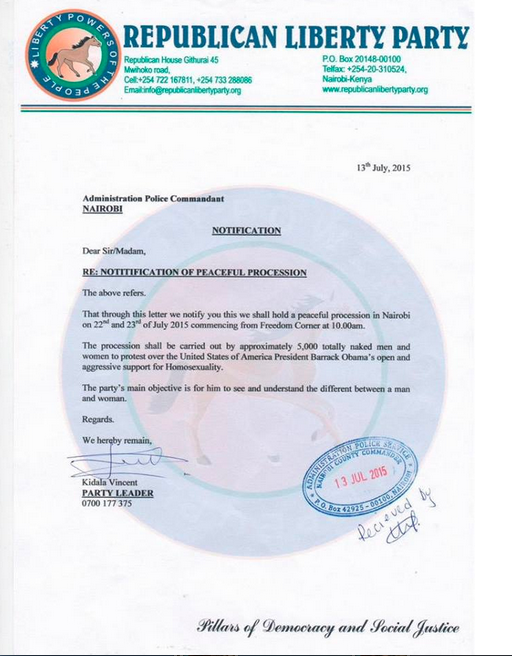 The letter to Nairobi’s Police Commandant regarding the protest states:

“The party’s main objective is for him [Obama] to see and understand the difference between a man and a woman.”

A squirrel has become an online sensation after it was reportedly “detained” when a woman called police to complain it was stalking her.

The panicked woman was unable to shake the rodent in the western German city of Bottrop, so turned to the authorities in desperation on Wednesday, police told Reuters.

North-Rhine Westphalia police took in the squirrel and found it was suffering exhaustion.

92-year-old Bridgehampton potato farmer Klaus Keinekleider, known as “Old Farmer Nakey” to locals, is locally famous for his practice of farming in the nude. In fact, Keinekleider’s yearly “summer unveiling,” when he makes his first-of-the-season nude run down Ocean Road on his rusty old tractor, is a cherished local tradition. But those not familiar with Keinekleider often demand that something be done.

“Every year we get a flurry of calls from city people,” Hamptons police spokesman Larry Hirsch says. “What they don’t realize is that nude farming wasn’t specifically prohibited in Bridgehampton until 1961. Even then, legislators exempted from the law any farmer who was then engaged in nude farming. Keinekleider is grandfathered in.”

Hirsch advises those who object to chill out. “These people are just worried that their highfalutin’ city friends will be repulsed by the naked farmer,” he points out. “They should relax and try to see it as a little bit of local history.”